We know we’ve said it before, but that’s because it’s worth saying; leading a gluten free diet doesn’t have to be restrictive. Just because you might not use plain wheat flour, doesn’t mean there aren’t a plethora of other flours to use in its place. Yes that’s right, a plethora. And what’s more, in times like these, they might even be easier to get your hands on than plain old wheat flour! So, we’re gathered here today to talk to you about the different flours that we have at Amisa, and how to get the most out of them. Sit down, take out your pukka pad and pen and take notes people. 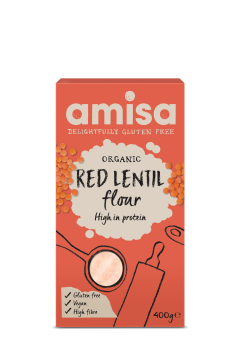 Red lentils – made with split red lentils like you might add to a curry or dahl, this pale red legume is high in both protein and fibre, so whether you are a gluten free-er or not, this nutty alternative to wheat is wholesome and nutritious. Excellent news, right? Another tick in our book is that lentils contain folic acid and magnesium, which have been shown to support heart health.

Because of its connotations with Indian cuisine, you’d be right in thinking red lentil flour is especially good in savoury recipes. You may be familiar with using red lentils for dishes such as curries and dahls, so you can of course use red lentil flour to thicken sauces such as these. It is however, also highly adaptable and can be used in sweet recipes alike. Check our picks below for our favourite ways to use this versatile legume. 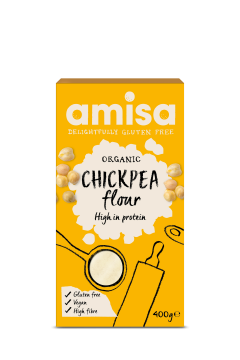 What’s in it?
Chickpeas – this is another member of the trusty legume family. Known mainly for its star appearance in the nation’s favourite; Houmous. Ok don’t get us started on houmous or we could be here all night… What makes them such a staple for vegetarians in particular, is their high protein content and natural nutty flavour. So, why not slip some extra protein into your diet in a decidedly tasty way.

Any dish (within reason of course) you want to bulk up a little, chickpea flour’s going to help you do just that. A natural thickener and protein rich, it’s super filling and is a tastier way of adding richness to sauces than regular flour. Its excellent ability to absorb liquid means you can use it for more than you’d think! Anything that you’d normally use blitzed chickpeas for, try it with chickpea flour. Falafels? Yep. Houmous? 100%. 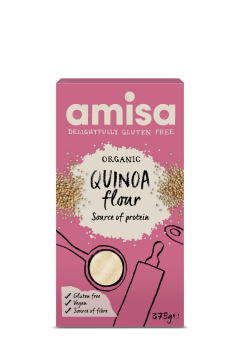 What’s in it?
Quinoa – Once a laughing stock because of its unusual pronunciation, our friend Quinoa weathered the storm of internet memes and finally progressed through the ranks of food fad territory; becoming a store cupboard staple. Rejoice! This trendy little wholegrain has in fact been around for centuries, its domestication originating in Peru and Bolivia over 5,000 years ago.

You may well have heard of Quinoa in its wholegrain form, but this is such a nutritious seed that it would be a shame not to pack those properties into a flour! As with many gluten free flours, this one is equally high in fibre and protein. Since quinoa is a seed, not a grain, it contains far higher levels of various nutrients than starchy grains.

Buckwheat – Like Quinoa, Buckwheat is also a pseudo-cereal; a type of seed that behaves, and is used, in the same way as a cereal.  And just before you ask, if it’s called buckwheat then how is it gluten free? Well, despite the confusing name, it is equally not a wheat either. Those pesky ancestors of ours… As with many of our flour family, buckwheat (and consequently its flour too) is high in protein and fibre. These distinctive pyramid-shaped seeds are also often called Groats, and they have also been shown to have a low glycemic index, which means they’re suitable for people with type 2 diabetes.

Buckwheat flour has been used for centuries in Tibet, China, Japan and Korea to make ‘soba noodles’, which in our opinion gives it great culinary credentials. Buckwheat can be an acquired taste, but adds a delicious nutty, almost bitter taste to sweet and savoury recipes, if you are so inclined. This wonder-seed might not be everyone’s cup of tea, but like all acquired tastes, once you start liking them, you reaaaally like them. Olives anyone? 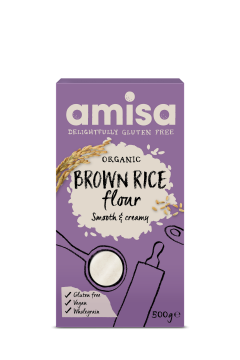 Brown rice – A gluten free wholegrain, meaning the outer, fibre-filled layer called the bran, the nutrient-rich core called the germ, and the starchy middle layer called the endosperm are all kept intact, and subsequently you get a nutritious, fibre-rich flour when the whole grain is ground down. So, whilst white rice flour is equally gluten free, we suggest you opt for the OG version if you want an easy way to pack more nutrients into your bakes.

Brown rice flour is one of the most popular gluten free flours (not that it’s bragging or anything…) and is widely used in commercial gluten free recipes. Due to its harder texture, compared with seed flours like we’ve mentioned above, it is super light in cakes and breads. This gluten free guy is like a loyal friend, mild mannered and flexible (read neutral in flavour and versatile) so it can also be used to thicken sauces and won’t alter the flavour of your sweet bakes. 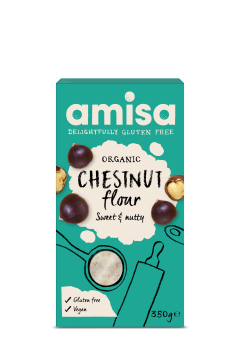 Chestnuts – Whoever knew you could make flour from chestnuts eh? Well, us. That’s who. We’re of the controversial opinion that chestnuts are for life, not just for Christmas. Our chestnut flour is the odd one out of the bunch, because believe it or not, chestnuts are in fact a fruit that come from trees. Seeing as they’re confusingly not a nut, they have a comparatively low fat content. An all-rounder in digestive health, not only is chestnut flour gluten free, but it’s also been shown to reduce cholesterol levels and stabilise blood sugar levels. Plus, they’re bursting with vitamins and minerals such as Vitamin C, copper and potassium. All the more reason not to save them for roasting on the fire.

Chestnut flour is a staple ingredient in Tuscan cooking, so whilst you may not be able to travel to Tuscany at the moment, why not try an Italian inspired menu in the comfort of your own home. From Necci (chestnut pancakes) to chestnut gnocchi and the traditional Tuscan cake Castagnaccio, we’re loving learning more about this cuisine, and we think you lot will too.

You’re all clued up, so what now?

Do we really need to answer that question? Get cooking foodie friends! If you’re anything like us, our weekends are looking a lot more bare at the moment, so it’s the perfect time to get all cheffy in the kitchen with our selection of gluten free flours. Whoever you’re locked down with, we promise they’ll be impressed. Share your foodie creations with us @amisaorganic and tag them with #GlutenFreeFlour101

Subscribe to our newsletter for recipes, health hacks, new products and more!